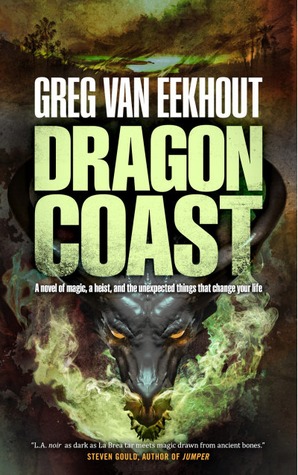 Predictability: 4 out of 5 (Where 1 is totally unpredictable and 5 is I knew what was going to happen way ahead of time.)

Small spoilers for book two were unavoidable. (Really only one spoiler, and more is revealed in the official summary than I tell.) To read my review of California Bones book one instead click here.

Sam is now a Dragon, or trapped inside a Dragon. Daniel’s doing everything he can to get Sam back. He had a perfect plan, but then the Northern kingdom kidnapped the Dragon. So now Daniel has to go undercover in the North to get Sam back.

When starting this novel I immediately remembered how much I enjoy the author’s writing. He has a great voice, especially in the way he describes things.

I wasn’t sure how he would do the whole Sam is a Dragon thing, but he impressed me. Rather than being the dragon, it’s more like Sam’s trapped inside it. As much as he tries to control it, with a cockpit and controls he fashioned out of bones, it proves stubborn and only occasionally listens.

Daniel’s been working for months on a plan to get Sam back. His old friend Moth and Em, (one of the many golem Emmas.) who is friends with Sam, are helping him. I liked them both and I’m glad they’re back. Cassandra’s in it too. My ship hasn’t sunk yet! I still think she belongs with Daniel. Jo’s even back! (The shape shifter) though not for very long.

I enjoyed all of the new characters. Annabel was my favorite! (I can’t tell you who she is without spoilers. Sorry. But she was one of the best parts of the book!) All of the people at the Northern court were interesting as well, even though Daniel couldn’t trust anyone.

Gabriel and Max’s joking, demeaning, friendship is as great as ever. Cassandra was a good addition to their group. (The three teamed up to locate the dragon while Daniel and Moth went undercover.) Water magic is as complex and interesting as everything else in these books. It’s nice that the author didn’t just do it mentally like most magics. I liked the pipe contraptions Gabriel used to manipulate water.

The pacing was steady until the end when it got a bit intense. (I may have lost some sleep.) The plot, while mostly what I expected, was done well. There wasn’t much thievery in this book, but I didn’t mind.

I hate it when a series ends! I didn’t want this one to end and I was afraid it wouldn’t end well, but I’m very satisfied. And happy. There could so be more books though!

There were a couple small continuity issues. Daniel explained his plan to steal the stone to Moth after he already knew about it. (I’m probably the only one who noticed.) And a stuffed duck momentarily turned into a rabbit. (It makes sense when you read the book.)

Do you mind it when a character comes back from the dead? (Not a spoiler, kind of the whole premise of this book, Daniel trying to get Sam back.) I used to be really annoyed back when I read comic books at all of the reincarnations, but I don’t mind it now as long as it makes sense. (My change in opinion might be due to Supernatural.)