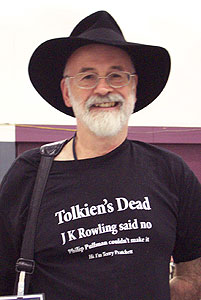 Terry Pratchett died yesterday after an eight year battle with Alzheimer’s disease at the age of 66. As most of you know, he’s my favorite author. I cried when I read his tweet. It was in all capital letters like his character of Death always speaks.

“AT LAST, SIR TERRY, WE MUST WALK TOGETHER.”

For those of you who haven’t read one of his books I can’t recommend them enough! My first and still one of my favorites was Good Omens co-written by Neil Gaiman. His Discworld series has many story lines and you can really start with any of them.

The Color of Magic & The Light Fantastic was the first book(s) in the series and introduces the inept wizard Rincewind. (My personal favorite.)

The Guards story line is also popular and terrific! It starts in Guards! Guards! Which was originally just going to be just one book about the guards who are always throw away characters in fantasy novels.

Mort stars Death’s storyline, but you can start with Reaper Man too. I accidentally started with Hogfather, so you can really start most of these books anywhere.

I had gotten out of the habit of reading because I was having issues getting the words to stick in my head. I was home sick and grabbed the closest thing I had to read, a copy of The Color of Magic that I’d bought months ago after enjoying Good Omens so much. I’d tried to read it before but couldn’t get into it with that weird intro. Being stuck on the couch was good for me, because not only did I read the whole book but as soon as I was well enough I bought several more. I was addicted! (The used book store people used to call me Pratchett girl.) I love a book that can make me laugh!! (In this case of Pratchett’s books out loud and repeatedly!)

Who is your favorite author?

“No one is actually dead until the ripples they cause in the world die away.” -Terry Pratchett (Reaper Man)