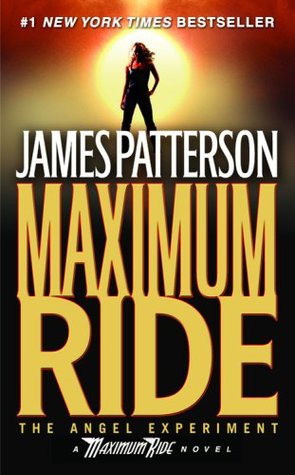 Max, Fang, Iggy, (14) Gazzy, (11) Nudge (8) & Angel (6) were genetically engineered and have wings. They spend their time running from the other mutants the lab developed and trying to save the world.

The Good: The characters and their relationships with each other were well done; they really felt like a family. One the best parts of the books was how Patterson describes flying. It felt like I was right up there with Max and the Flock. (What the group of kids calls themselves) I also liked the unique powers that members the Flock have.

The Bad: These aren’t deep books, I’d consider them ‘fluff’. They’re fun to read, but there’s not much thought required. Maximum Ride is an entertaining series if you don’t try to analyze it. (Like a corny B movie)

The villains feel like they’re out of old movies and I half expected them to twist their mustache. They were the old making a speech instead of killing the good guy so the good guy has time to escape kind of villain.

Four years ago, the flock escaped from the lab called the school with the help of one of the scientists named Jeb. Two years ago he disappeared and they’ve been on their own in the Colorado mountains ever since. Max as the oldest has been acting as the leader and mother of the Flock.

After years of peace, the people at the school have found them, sending Erasers, genetically engineered people with dog DNA (think werewolves) after them. The flock wakes up after the attack to find youngest, Angel kidnapped. Max leaves blind Iggy and young Gazzy (Angel’s brother) at the house while the other three  return to the School, the site of their worst nightmares in an attempt to rescue Angel.

The Angel Experiment is a good, but easily put down-able book. The chapters are really short (like a couple of pages short) and at the beginning the narration switches between Max, Nudge, Gazzy, and Angel. With such short bursts of action you’d think it would make me want to read on, but it just annoyed me. Luckily the switching stopped at around 40% and with Max as the only narrator it was much easier to read.

Like a lot of kids’ books the main characters are telling their story to the readers. I have no problem with this, (After all I love Percy Jackson) but the way the story is told seemed overly simplified, and almost felt dumbed down. And though the characters were good, at this point they felt more like characterizations.

The Angel Experiment has plenty of action, but most of it was running and fighting Erasers. The Erasers didn’t make much sense, they attacked randomly, sometimes viciously, and other times they’d just leave.

If the first book was put down-able, this one wasn’t. I almost read the entire book in an afternoon.

There was less action, but somehow it was less boring. I also found myself chuckling a couple of times.

The characters were also expanded nicely, especially Fang and Iggy. Fang seems more like a real kid; he starts a blog and shows that he has a sense of humor. And in Iggy’s narration we learn isn’t as carefree as he seems, being blind really bothers him and he wants to find his parents.

The whole clone story line seemed rather unnecessary and cliche, but it didn’t detract from the story. (Not a spoiler, at the beginning of the book when the first hint of the clone appears we’re told.)

I have a feeling Patterson only included Disney World so he’d get to go and write it off as research. (Why didn’t I think of that?)

SAVING THE WORLD AND OTHER EXTREME SPORTS

Wow talk about an explosive start! Unfortunately, there’s there’s more chapter hopping at the beginning. (between Max, Nudge and Fang.)

I liked that there was finally some romance! I wish the flock would stick together though. The interactions between the characters is what makes the books.

I still don’t know what the ‘big bad guys’ plan was. We know they planned end the world as we know it, but it was never explained how they hoped to achieve this. There is a serious lack of explaining the villains’ plans in these books. First they want to test the flock, then capture them, then kill them. Make up your minds already!

The flock is ‘mutating’ and gaining new abilities. I’ve wanted more powers for a while and this is the best part of the book, (and the only reason not to skip over it). Even if the powers don’t come into play much.

This book should be called “Why global warming is bad”. I understand Patterson trying to send a message, but it felt forced. Everything about the Final Warning was rather ridiculous. The bad guy was even called the Uber-director…

More violence than the others. (Though nothing was described in detail.)

Dr. Martinez is kidnapped and her scientist friends get the navy to help search for her. Before the flock can board the sub they have to pass some basic combat tests to receive clearance. (This part was hilarious and easily the best part of the book!)

‘Max’ felt like another side story and was easily skip-able, but it’s worth the read just for the training scenes.

I liked the romance in this book. I thought the other kids were a bit rough on Max though. The whole flock is supposed to be together! (I sound just like Max. She can be mean sometimes, but she really cares for her family, which is why I like her.)

The book bounces between the two teams (flocks) but we don’t really get enough time in either. I hate when the flock is fighting and unhappy. (Enough teenage drama, just kick bad guy butt!) There’s a new plan to end the world. This one is a little more thought out than the others and seems like it might actually happen.

There are suddenly lots of new mutants called gen 77 or something. I’d rather the flock was special. (Also, for having the book named after her, Angel isn’t in it that much.)

The last novel was good and fitting, but we were left with many hows. How did they do that? Why did that happen? I expected more plot from Patterson. It also wrapped up a bit neatly. In the last three chapters all the characters were suddenly perfect and their relationships miraculously fixed. (Huh?)

Sorry for such a long review!