Blogging has really been good for me to branch out my reading. (for years the only thing I read was the Harry Potter series on repeat) Then I found an author I liked and stuck with them until I’d read everything they ever wrote. (I chose prolific authors)

Since I procrastinate too much to do the official top ten lists I thought I’d come up with one of my own. My top ten most read authors.

Goodreads made this easy, (I didn’t even know about this feature until recently, so I’m sharing in case someone else hasn’t found it yet either.) Under the shelves there’s recommendations, widgets, ect. One of those is most read authors! 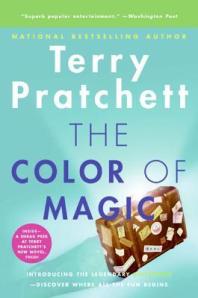 He’s obviously my favorite author, and for good reason. His books are hilarious, each one I crack up multiple times. They also have great characters and a cool world. As with most authors his first few aren’t as well written, but they’re still some of my favorites. There are also all sorts of magical craetures, warewolves, vampires, undeaad, igors, dwarves. All with their own Pratchett flair of course. My favorite was when he spoofed Twilight before Twilight even existed! (He’s that good) In Carpe Jugulum.

His main series is Discworld and there are multiple storylines, so you can pick up any number of books to start. My favorite story line is about the inept wizard Rincewind, who is a huge coward. His storyline starts the first book in the whole series The Color of Magic. (It starts kind of weird, but stick with it, it’s worth it!) My second favorite is the guards (which must be popular because they have the most books, and originally it was only going to be one book!) which feature the city guards as they solve mysteries. (Guards, Guards! Is the first book) The main character Vimes leads the guards, and he’s great. He says he’s not very smart, but he sticks with it. My third favorite is DEATH, yes that death. He has a granddaughter too. It starts with the story of Mort. The other storylines are the wizards at the college (which starts with Rincewind’s story Sorcery), the witches (which starts with Equal Rights), a young adult series staring a witch named Tiffany Aching, (The Wee Free Men) the new storyline of Moist Von Lipwig as his tries to improve the main city, Ankh Morpork. (Going Postal) There are also plenty of stand alones. (This was all done from memory, so if anything is wrong I’ve failed as a Pratchett fangirl!)

(I won’t even go into how inaccurate that cover is…)

Modesitte writes epic fantasy and I love his worlds and magic systems.

His main series is the Recluse saga (though he’s got like a ten series, in both fantasy and scifi). He writes Recluse strangely, the first 5 is like the main story line (and oddly not my favorite) but after that they jump back and forth in time with usually two books in each time line. My favorites are Cerryl (The White Order, Colors of Chaos) and Lorn (Magi’i of Cyador, Scion of Cyador). My favorite series is the Corean Chronicles, which is about aliens and magic. It’s hard to explain! (And I wouldn’t want spoilers.) It’s good, let’s go with that. He also writes the Spellsong Cycle where singing is magic and a woman from Earth winds up there. (I think that’s his only series to connect with earth), and his latest series the Imager Portfolio which has magic that can create items. And I’m sure there are more I’m forgetting. 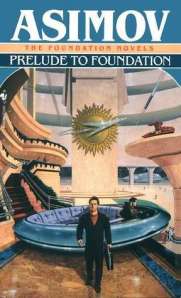 (Most of these are short story collections, which have overlapping stories, so it really isn’t all that many) Asimov is my favorite short story writer! All of the plots of his short stories could’ve easily been novels. He had so many ideas! My favorite is the the robot books, (like I, Robot, which the movie was VERY loosely based on). He also wrote the Foundation trilogy, which he is best known for. He was working on merging the two when he died. (Aids from a blood transfusion in the 80s) Other authors have attempted to write the books he didn’t, but I can’t bring myself to read them.

Goodkind writes the epic fantasy series The Sword of Truth, which I read because my sister liked it. (The tv show is rubbish) It’s a really good series even though the main character is like perfect and he sometimes gets a little preachy towards the end. (Not religious preachy, just righteous) But I can ignore all that, because they’re so good! I love the characters and how the main character Richard is always so tough, but that doesn’t make the plot predictable or dull in the least. The female main character kicks butt too, no one needs to save Kahlan. (Goodkind tried to end the series, but his next book flopped, so he went back to Richard and Kahlan, but my sister’s told me about the second series and I don’t think I want to read it.)

Yes, I’m counting her short stories. I don’t think I’ve read any series more. (I’m joking about the think part. I have no clue how many times I’ve read and listened to these books!) If anyone hasn’t read Harry Potter yet, they should! Everyone should read it, at least to know what all of the hype is about. For once the hype is so worth it! I’m not a fan of the last book *don’t throw fruit* so I’ve only read that once. Did anyone else go to the bookstore at midnight to get one of the books? I did! Number 7!!

How could this list not include Riordan? I just wrote a gush post about Percy Jackson, so I won’t say anything more except he has the best sense of humor! Riordan’s one author I’d like to know in real life!

I didn’t read the Mortal Instruments until this year, because they didn’t sound like my kind of book. I was wrong. (It happens.) I’ve already wrote a post about these books, so I’ll just say I would love to be a warlock. How awesome are those powers?

Again, I’ve already talked about them. I’m working on a post for the last books right now. I just have to get my hands on book Nine! It came out in August, I’m so behind. 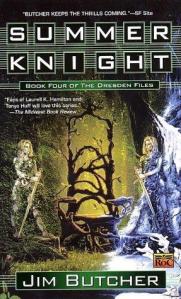 My first foray in to urban fantasy. Harry Dresden is a wizard for hire, he’s in the phone book and everything. These books have a fantastic world, great characters, a sense of humor, and kick buttery. In other words, they rock! The Dresden Files are fantasy and mystery with tons of action! Dresden is a bit like Bruce Willis in the Die Hard movies, he always kicks butt, but he gets abused while doing it. The first 3 books of the series were great, but then they got even better! I haven’t liked the last few as much, they’re longer and they don’t seem to hold my attention as well. I still highly recommend this series! (Note: there is adult content in these books, mostly in the first one though. Harry doesn’t get lucky much after that.) Butcher also writes an epic fantasy series, which has been gathering dust on my shelf. 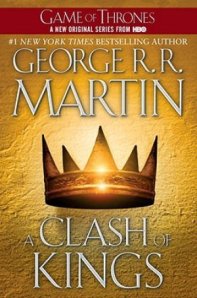 Technically only 6 books, because goodreads counts short stories, but since his books are so long, (I’ve read 5774 pages by Martin) he still deserves to be on the list. The description of these books totally doesn’t sound like me, so it’s a good thing I started them years ago, with only the back cover to go on. I know there’s now a tv show everybody watches and raves about, but I can easily skip the adult content in the books (because wow, yeah lots of adult-ness) but it’s not so easy in a tv show. (which is on HBO, so I know it’s going to be very adult) Surprisingly there is little fantasy in these books. (I know you’ve probably heard about the dragons and the ‘dead like’ people) But most of the story is about various families trying to get the throne. (The Iron throne) There’s political intrigue, plotting, backstabbing, epic battles. (inbreeding) These books have it all! Why do I love them though? The characters! There are TONS of view points and oodles of characters and they are all so unique (I could never start a chapter and mistake one character for another) and there’s really no good and bad, but lots of gray. Martin writes for the ‘villains’ as much as the ‘heroes’ and I find myself rooting for both! My favorite characters are Tyrion, Jamie (surprisingly, once he gets a POV), Jon Snow, and Arya Stark. I know I didn’t list Dany, but I hate her storylines! Can anything else bad happen to the poor girl? (Note: Martin needs to write faster! The first book came out in 1996 and we’re only on book 5 now.)

This post got longer than I planned… Sorry for all of the book babble.

What are your top authors and how many books by each have you read?