I’m back! I missed everyone! I wasn’t able to take my computer with me this year and I got sick.

Look how much my sister’s dog Sebastian has grown!

He’s so sweet! Whenever I coughed he’d come and cuddle me!

I hope y’all (I was in the South) had a Merry Christmas! Mine was wonderful! I got a new Kindle and three books! I also saw the new Star Wars movie, which was amazing! 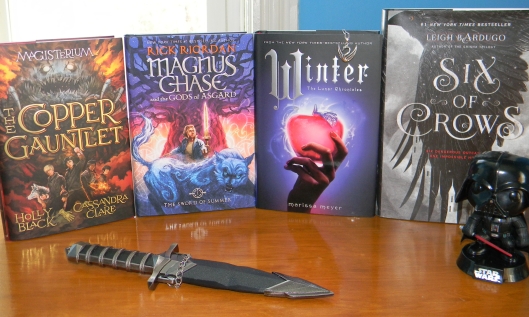 I finally started a bookstagram account and I’m loving it!

Last year I failed at my Goodreads Challenge and only read 68 out of 100 books. So naturally I set it for 100 again! (Third times the charm?) I’ve also decided to join a couple of challenges. 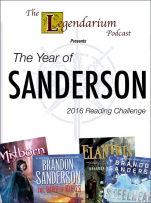 I made my own Challenge too! I borrowed (stole) some random ones from various challenges that I liked! I NEED to read more books I already own!

Did you make any resolutions/ challenges? How was your Christmas? Get any good books? Have you seen the new Star Wars movie?

Predictability: 2 out of 5 (Where 1 is totally unpredictable and 5 is I knew what was going to happen way ahead of time.)

A new drug, Jurda Parem, appeared in Ketterdam, which allows a Grisha to have insane powers. The Fjerdan witch hunters have the maker of this drug and Kaz and his crew have been hired to break him out before someone else gets their hands on him.

Kaz is the mastermind. A ruthless gang lieutenant who walks with a cane, always wears gloves, and has a dark reputation.

Inej used to be a tightrope walker and now acts as Kaz’s spy. She believes in her gods and can climb anything.

Nina’s a curvy Grisha who does everything over the top.

Jasper’s a hyperactive sharpshooter with a gambling problem, but he always sees the best in people.

Mathias is an ex Witch Hunter convict who is torn and confused by his feelings for Nina.

Although Six of Crows takes place in the same world as the original Grisha trilogy, it stands on its own. You don’t have to read Shadow and Bone to understand this book! Usually it’s still better to read the books in order for the little details, but there were only a couple of mentions of the characters from the first series. (I almost missed the one!)

All of the characters were flawed and very real! They all had their vices, weaknesses, and shady pasts. I loved them all, but Kaz was my favorite! He might be more villain than hero, but I liked how clever he was, always a step ahead.

Most of our crew are a part of the Dregs, a gang from the barrel, the worst part of the city of Ketterdam. My favorite part was their traditions! Like saying No mourners, no funerals before a job.

As much as I liked the original Grisha trilogy, Six of Crows is miles better! Bardugo has obviously matured a lot as a writer since then. Her writing is tight and beautiful. She sets up the novel and the intricate world quickly and without any info dumping.

I had a lot of questions about the characters’ pasts and they were all answered as our characters head the capital of the Witch Hunters. The short flashbacks were interspersed as they travel and break in, and kept things interesting.

Once the job starts the action doesn’t let up! I tried to savor this book, but I gobbled if up once they reached the city. Six of Crows has the perfect combination of telling us part of the plan, but keeping plenty of surprises. Of things going to plan and going to hell. It all made for an incredible ride!

Bardugo did an excellent job of expanding her world! From the grittiness of Ketterdam to the shiny white city of the Witch Hunters, I enjoyed it all. The magic system wasn’t expanded much, but Nina’s heartrending was cool.

What was the best book you read this year? Mine was either Six of Crows or Uprooted!