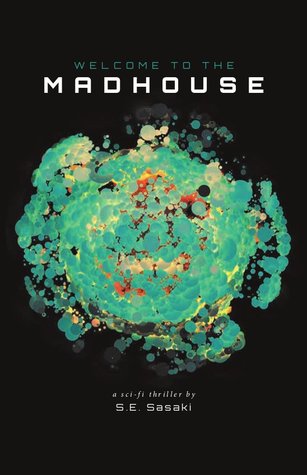 Predictability: 4 out of 5 (Where 1 is totally unpredictable and 5 is I knew what was going to happen way ahead of time.)

Ratings: Rape (Only in the prologue. I recommend skipping the prologue entirely.) Mild grossness.

Grace is the new surgical intern on the medical space station the Nelson Mandela, under the fabulous (Just ask him) Dr. Hiro Al-Fadi.

Bud, created by Al-Fadi, is an experimental surgical Android. He’s either malfunctioning or experiencing the emotions of a human and he doesn’t know what to do about it. Why is he drawn to the spunky new doctor?

When a ship docs without any live patients, they realize a deadly virus has been released into the station. It’s up to Grace and Bud to find a cure.

I’ve never read an indie book with so few errors!

The real excitement doesn’t get going until after the halfway point. But it wasn’t boring and because the time was taken to establish the characters, I could properly worry about them. (The tech to resurrect people made things less scary, though I’m not sure if that’s a good thing or a bad thing.)

It’s been a while since a book called to me, and this one certainly did. I also lost a bit of sleep on this one. (I suddenly realized it was 3am and the book was over..) I even laughed aloud a few times!

Normally a book has to have magic or super powers to get 8 stars out of me, but Madhouse gets it for characters alone! The characters were all so well done and fleshed out! A nurse who had only two scenes somehow felt like a person. And even the space station AI had personality! (He was a hoot!)

The relationship between the chief surgeon, Al-Fadi, and his anesthesiologist was easily one if the best parts of the book! Though a bit over the top, their constant bickering, joking relationship felt very real to me.

The entire book takes place on the space station the Nelson Mandela. (Or the madhouse as Dr. Al-Fadi calls it.) Most of the world building is confined to what is important to the doctors, but I enjoyed the hints we got about the rest of the world as mankind explores the stars. (and makes war.) One of the coolest parts of this world was the genetically adapted soldiers! Some were part wolf or tiger, or even part orca and they were not only described well, but thought really went into what these people’s lives would be like.

The best way to describe the mood would be Doctor Who. Comedy mixed with tragedy and some potentially scary scenes. (To me a virus that liquefies people is very frightening, but this isn’t horror.) The mixing of comedy and thriller is hard to do so that the comedy doesn’t lesson the stakes, but Madhouse did it well. (I laughed, I was scared, then I laughed!)

It was love at first sight… On the part of the robot! (I didn’t expect that.) My biggest annoyance was how he addressed her. Always by her full name and some wondrous adjective. At about forty percent he decides to stop and I cheered, but he failed at it miserably. By this point it became more funny than annoying though.

I was warned that the prologue might bother me, so I skipped it. Later, curiosity got the better of me (because I was told it was mild) and I wanted to write a full review. I liked the book better without it. I would’ve figured things out too quickly if I’d read it. I recommend skipping it.

Do you read science fiction? I used to read almost all sci-fi, but in the last few years I’ve switched to almost all fantasy. So, it was nice to read sci-fi again. (Oddly enough it’s also sci-fi month.) I’ve always been a big fan of robots! Particularly when there’s romance involved, and I’m interested to see where this one goes.

16 thoughts on “Welcome To The Madhouse by S.E. Sasaki”